Cookies are everywhere but we only use them to count the number of lovely people who come to our website. Read our privacy policy or carry on browsing and we'll never speak of this again.

Got a set of complex messages to get across
to a hard-to-engage audience?

Write pages and pages of words Make a game

The very best challenges for us at Plump involve clients being genuinely bold and ambitious. And when North Yorkshire Police approached us to re-think their kids’ personal safety campaign Crucial Crew for the digital era, they inspired us to think big.

The result is a lively and colourful urban adventure game that gallops its 10-year-old target audience through all kinds of tricky challenges, from perilous water and rail scenarios to cyber bullying and citizenship.

We knew from the outset we were in really good hands and you’d deliver something really exciting. You haven’t disappointed!

The Plump team asked all the right questions and guided us expertly along to ensure we arrived at a list of core deliverables that got instant buy-in from all the stakeholders. We left the workshop with a clear idea of what we wanted to achieve. Everyone had a role in shaping the vision, giving us all a sense of ownership and pride in the end result.

Crucial Crew has an incredibly broad remit. As well as evergreen safety lessons (gas leaks, crossing the road, avoiding drowning and the like), today’s campaign includes sticky issues such as internet safety and domestic abuse.

With such a crowd of themes jostling for position, we decided the best way to marshal them into place effectively was to start with a workshop.

We locked all the relevant personnel into a room and set to work deciding priorities, brainstorming ideas and delving into years of experience and policing expertise.

The brief might have been clear but we had a lot of very serious themes to include. And by the end of that day we knew we all wanted to make a game.

The result was a clear brief, that everyone understood and bought into. 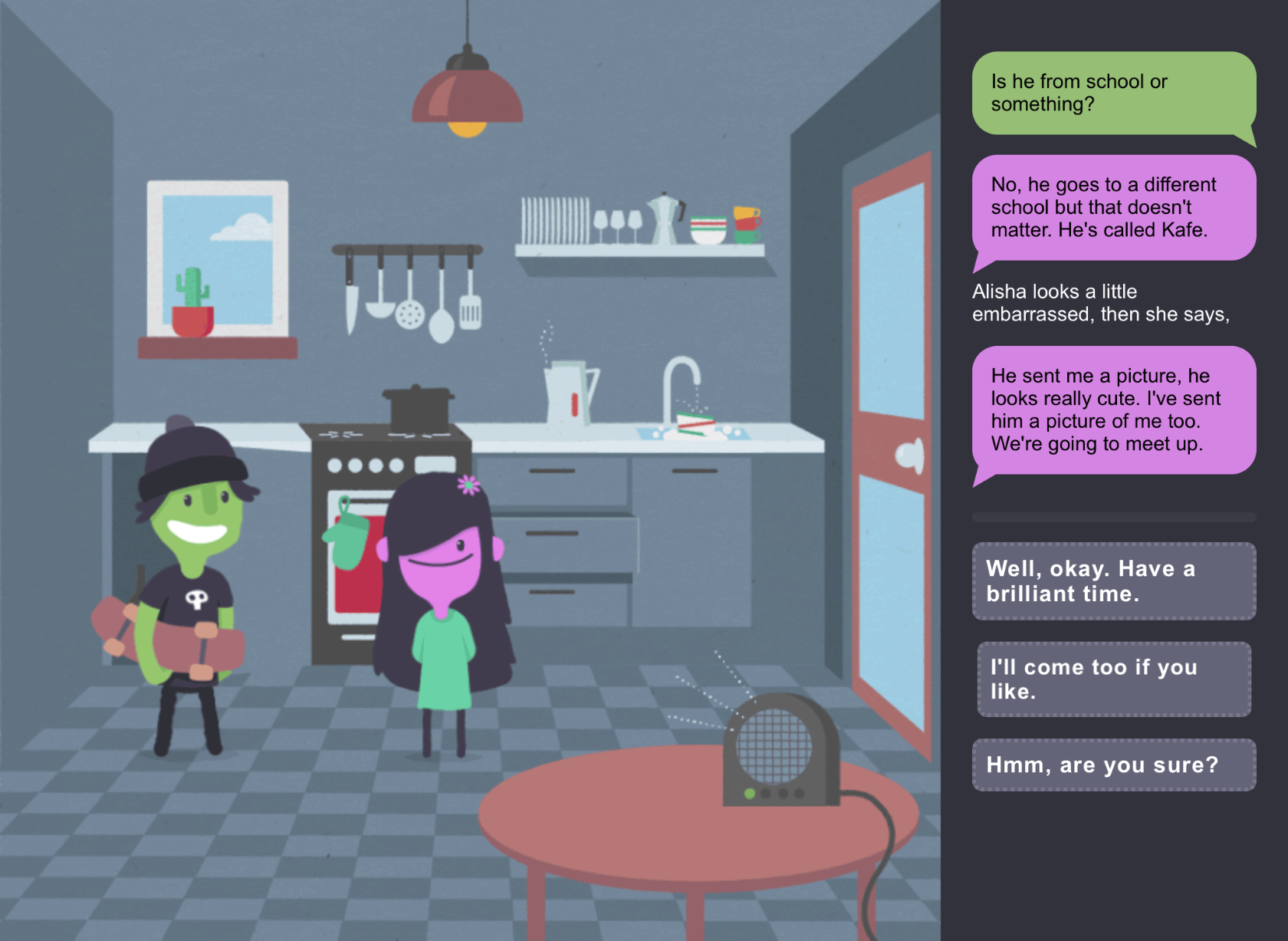 Of course, digital-savvy kids will happily soak up information through games - but could we match NYP’s real-world budgets and timescales with the demands of an audience that’s grown up on blockbuster productions?

Many cups of tea and late-night biscuits later, our team thrashed out the answer. A skilled blending of three open source technologies: a story engine, a graphics engine, and web tech.

We mapped out the scenarios through a script builder, linking this with the gaming element. Although the game is accessible online for any device, we optimised it for touch devices, knowing children are more likely to play it on tablets and phones. It’s also compatible with electronic whiteboards so teachers can also use it as a group teaching aid in the classroom.

We wanted to produce something engaging, bright and fun. We all know kids learn best through play when they don’t realise are ‘learning’ – so we felt the game format was the right way to deliver what can be, quite dry and serious lessons.

Crafting the look and feel

Bubbling with ideas, we needed a look and feel that was going to grab our audience - but still be simple enough for kids of varying abilities to get to grips with.

We knew bright and clear was the key and we wanted to create characters with a little ambivalence in terms of gender and race.

Fortunately, Richard Corrigan at dogeatcog was the man for the job. He translated our demands into a cast of original characters who were at once cute, cool and, in some cases, green.

Like the visuals, the script had to be simple enough for the audience to understand and funny enough to engage them. Chatting it through with our own kids, the message came through strongly: ‘Don’t try to be too cool.’

Players choose their own avatar from a choice of three - all of whom who have just been to a Crucial Crew event and are clued up about the personal safety messages it teaches.

By inviting the player to choose the right advice as they move through the game, they feel they’re passing on what they’ve learned, rather than being tested. Giving the players options to choose their own path empowers them to try out different choices - in a safe way

It’s been a really fun and creative process working with Plump. We wanted characters that are bright that kids could identify with. Rich at dogeatcog has absolutely nailed it with his designs and we’re looking at bringing the characters further into the workshops and supporting material.

We were able to bring the game to life by standing on the shoulders of giants. North Yorkshire Police had brilliantly ambitious ideas - but real world budgets and timescales.

The key came when we found the existing technology we could leverage to bring those ambitions to life, on time and on budget.

As our lead developer Patrick Smith says: ‘If we’d had to write the game engine from scratch, we’d still be there next year. As it was, we found an effective blend of solutions that provides great game play. Plus, we discovered we absolutely loved building it!’